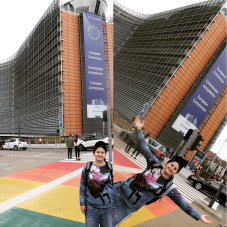 At the rainbow crossing between the HQs of the European Commission and the European Council in Brussels, I met Vitalina. Vitalina is one of the heroes featured in the 2018 Petition Campaign of Amnesty International. During the 2018 Women’s March in her hometown, a far-right group threw red paint all over Vitalina. Her eyes began to hurt immediately. She suffered from chemical burns. I showed her around in the European neighbourhood of Brussels. But I guess her activism embodies the European ideal much more than all those big fancy building.

Is Slovenia an example for the rest of Central Europe concerning LGBT-rights? Lana wouldn’t say so. But her organisation Legebitra – who turned 20 years old this year – is for sure an example for successful LGBT-activism. The WHO featured their HIV/AIDS-project, same-sex civil union is in force since 2017 and Ljubljana is one of the most open and progressive capitals in the region. As a director of this organisation, I interviewed her for an exclusive article which will be published next year.

I was impressed. I was impressed by the hospitality and the professionalism GenderDoc-M fights for LGBT-rights in Moldova. Anastasia is director of the organisation. She’s been member of the board of ILGA-Europe as well. We had a very interesting discussion on the societal split between Russian and European values in Moldova. A

fter this discussion, Andrey showed me around in Chisinau. He’s a young volunteer for GenderDoc-M and after posting a coming-out video on social media earlier this year he became a famous LGBT-activist in Moldova. What an honour to meet these heroes!

My alma mater invited Kasha to Belgium in the context of the Belgian Pride. For ZiZo-Magazine, I had the honour to interview her. Kasha is not just an activist. She’s the face of the Ugandan (and African) LGBT-movement. Uganda is one of the most dangerous countries in the world for the LGBT-community. Earlier this year she fortunately survived another murder attempt. Respect!

We’ve met each other at minus 25 degrees in the Ukrainian capital. I was there for my research on the impact of the European Union on LGBT-politics in Ukraine. Ulyana welcomed me at the offices of Insight NGO, one of the biggest LGBT-organisation of Ukraine. As PR-manager for her organisation, she’s been dealing with the communication on several events. One of these events is the annual Festival of Equality. Almost every year, the festival has to deal with serious violence by far-right groups. Their commitment makes them real heroes.

Max and Lilit do have a special place in my heart. They are leading Right Side NGO – the only trans organisation in Armenia. After I published an interview with them, I received death threats of Armenian diaspora in Belgium. This demonstrates how violent and dangerous the situation for the LGBT-community must be in Armenia. 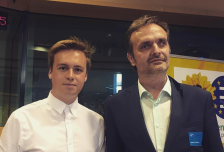 Being the director of the Russian LGBT Network, Igor doesn’t need any introduction on his braveness. I met Igor at a hearing in the European Parliament on the prosecution of LGBT-people in Chechnya. Since then, I’m following Igor on social media and he’s been a real inspiration for my work. 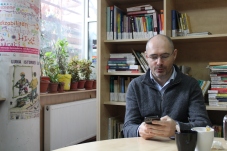 After mailing and Skyping with Florin on the situation of the LGBT-community in Romania for some time, I decided to visit Bucharest. I did a research for World AIDS Day on the HIV-epidemic in the ‘Men Having Sex With Men’-community there. Florin organised the first Pride Parade ever in Romania. Earlier this year, he was also one of the leaders of the ‘Boycott Referendum’-campaign in Romania. The success of the LGBT-movement after this campaign, may lead to real positive changes for the community in the coming years.

For my studies at the European Inter-University Centre for Human Rights and Democratisation, I moved to Venice. The local LGBT-organisation there is Stonewall Venezia. A few months ago this student organisation was attacked during one of their meetings by some neo-Nazis. The political discourse towards all minorities became much more violent in the last year.